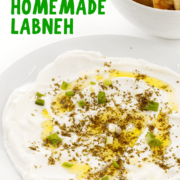 Once you realize how easy it is to make homemade labneh, you’ll be making it again and again. Labneh yogurt dip is thick, creamy, and delicious spread on anything.

Growing up in a Middle Eastern household, we have been enjoying labneh my entire life. Whether it’s spread over pita bread, dolloped on top of beef shawarma or used as a dip with veggies, nothing beats the silky, creamy and tangy flavor of labneh.

Common in Middle Eastern cuisine, labneh is a thick, creamy, and tangy spread made from full-fat yogurt that has been strained overnight. About half the calories and fat of cream cheese, labneh is relatively low calorie and light.

What equipment do you need to make yogurt cheese?

All you need is a large bowl, a fine-mesh strainer (I like this one by OXO), and cheesecloth.

How long will labneh last in the refrigerator?

Labneh can be stored in an air-tight container in the refrigerator for up to 10 days.

How do you serve labneh?

Traditionally, we like to enjoy it drizzled with olive oil, za’atar and salt then scooped with pita bread, pita chips or veggies.

Can I use Greek yogurt instead of whole milk plain?

Of course, the options for topping labneh are limitless. Other good ideas include smoked paprika, scallions, sumac or simply salt and pepper. 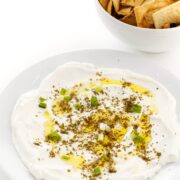 Print
No ratings yet

How To Make Homemade Labneh

Once you realize how easy it is to make homemade labneh, you'll be making it again and again. This yogurt dip is thick, creamy and delicious spread on anything.
Prep Time8 hrs
Course: Appetizer
Cuisine: Lebanese, middle eastern
Yield: 12
Calories: 46kcal
Author: Liz Della Croce