This hearty chili recipe is made with two cuts of beef and is simmered with beans, veggies, and lots of aromatic spices. Written in partnership with Beef. It’s What’s For Dinner. on behalf of the Beef Checkoff.

My family loves eating a hearty chili all year round but there is nothing quite like a giant pot of chili simmering on the stove or in the slow cooker during the fall months. Whether you’re heading to a friend’s house to watch the game or are having people over for a tailgating party, this hearty beef and bean chili is guaranteed to be a showstopper.

Made with two cuts of beef, hearty vegetables and beans, I’ve found in my years of hosting get togethers and family gatherings that everyone loves beef dishes. They’re hearty, satisfying and packed with protein.

One of the reasons I love making chili for tailgating parties and other get togethers is that it’s ideal for prepping ahead of time. In fact, chili tastes even BETTER on days two and three. What’s great about that is that the party host can actually relax and enjoy her guests instead of fussing over a hot stove on game day.

The secret to this beef and bean chili is that I use two different cuts of beef including Chuck Roast cut into cubes and Ground Sirloin.

For maximum flavor, I season the Chuck Roast cubes with salt and pepper then sear over high heat until a golden crust forms. This method of caramelization is one of the easiest and most effective ways to develop a rich, beefy flavor that permeates throughout the entire pot of chili.

For veggies, we use diced onions, garlic, colorful bell peppers and tomatoes. If you have extra veggies laying around, add them to the pot. I’ve made this recipe with carrots, zucchini and even corn in the past.

When searing the Ground Beef, use a potato masher to break up the sirloin into bite-sized pieces. This will help form a crust quickly and will cook the beef much more evenly.

Of course, the best part about serving a pot of chili is having fun with garnishes. Minced cilantro and diced, fresh onion are a must in our house but feel free to get creative.

Hosting a chili party is a great way to encourage guests to interact and serve themselves. Simply serve the chili in a slow cooker kept on warm then place out bowls of garnishes. A few ideas for garnishes include:

How far in advance can I prepare the chili?

The chili will last up to 4 days kept in an air-tight container in the refrigerator.

The best way to freeze chili is to vacuum seal it but if you don’t have that option, a large freezer bag with the air pushed out works too. It will last in the freezer up to 3 months.

Can I make this recipe with one cut of beef?

Yes you can. Simply double up the cut you have on hand and eliminate the second cut.

Can I use dried beans for this recipe?

Of course! You’ll just want to cook them before adding to the pan.

Now, who is ready to dive in? 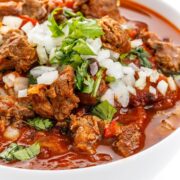 Yay or Nay?
This hearty chili recipe is made with two cuts of beef and is simmered with beans, veggies, and lots of aromatic spices.
PREP: 30 mins
COOK: 2 hrs
TOTAL: 2 hrs 30 mins
REVIEW PRINT
Servings: 12

Disclosure: This recipe is written in partnership with Beef. It’s What’s For Dinner. on behalf of the Beef Checkoff. All thoughts are my own.