This thick and creamy old fashioned rice pudding is the same recipe that your grandma used to make with warm cinnamon and plump raisins.

We eat rice on a regular basis in our house. For example, I love to serve brown rice with Szechuan Green Beans and Ground Turkey. Or, I use traditional long-grain white to fill Meat Stuffed Grape Leaves. No matter the season, we always have a variety of rice on hand in our pantry.

While I love the traditional savory recipes commonly prepared with rice, I recently decided to switch things up and create a dessert. Using the creamy flavor of milk, rich cinnamon, and sweet sugar, I recreated my mom’s all-time favorite recipe: Old Fashioned Creamy Rice Pudding with Raisins.

However, I altered my mom’s recipe using ingredients I had on hand. For instance, the Middle Eastern version that we grew up eating typically has a splash of orange blossom water. Unfortunately, I didn’t have any. So, I decided to create a more traditional version instead. The end result is a thick and creamy dessert full of flavor that fills the kitchen with luscious aromas.

Do you struggle to create a thick, almost paste-like texture? Let me let you in on a secret. The key to creating the perfect rice pudding consistency is cornstarch! Be sure to mix the cornstarch with water and stir until a smooth paste is formed before adding it to your rice pudding. Then, watch the magic happen as your dessert thickens right before your eyes.

I love the sweetness and extra texture that raisins add, but feel free to use other ingredients. For example, nuts, seeds, and other dried fruits would be delicious as well!

How do you serve rice pudding?

We love to refrigerate the pudding and serve it cold but it can also be eaten hot or served at room temperature.

Can I substitute an allergy-friendly milk?

Absolutely! This recipe works well with any milk variety you have on hand. However, flavored options such as vanilla almond milk or coconut milks will slightly alter the original taste.

How long can rice pudding be stored?

When stored in an airtight container in the refrigerator, rice pudding lasts about four days.

This dish happens to be naturally gluten-free so it’s perfect for entertaining or bringing to a pot luck party where guests may have a gluten intolerance! 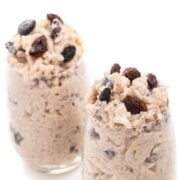