Chicken broth is slowly steeped with cinnamon, cloves, ginger and other Asian pantry staples then poured over rice noodles and topped with shredded chicken. 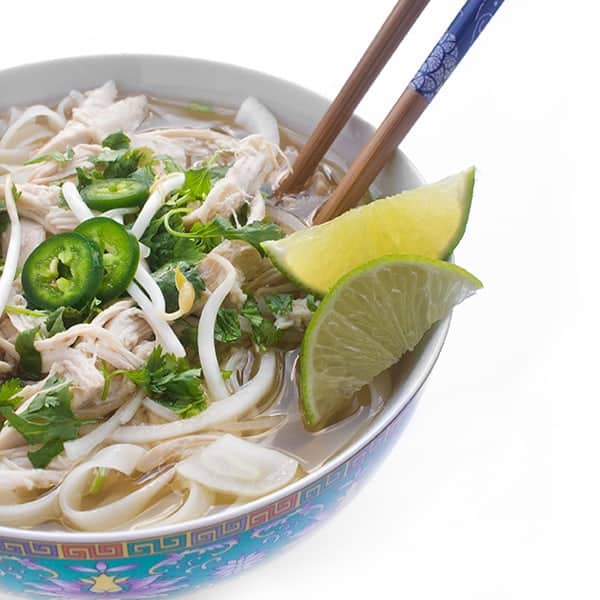 Chicken broth is slowly steeped with cinnamon, cloves, ginger, and other Asian pantry staples then poured over rice noodles and topped with shredded rotisserie chicken before serving. Of course, that’s just the beginning. Anyone who has ever ordered pho in a Vietnamese restaurant knows that this soup is all about the toppings!

On this particular evening, I topped my bowl with cilantro, bean sprouts, lime wedges, thinly sliced onions, and jalapeño slices but the options are limitless. Try hoisin sauce, Sriracha, Thai basil or any other fresh herb you have on hand. This rich and flavorful Slow Cooker Chicken Pho is going to be your new go-to weeknight dinner recipe!

Can I use a large stock pot instead of a slow cooker?

You can definitely use a large stock pot. You won’t need to add too much water, but keep an eye on it. I would do it for at least 8 hours for the best flavor.

Can ground coriander can be used instead of the seeds?

Get Featured On Instagram!Did you make this recipe? If so tag @thelemonbowl using the hashtag #thelemonbowl to be featured!

Want more delicious Asian-inspired recipes? Check out my Pinterest board!

Liz is the founder and creator of The Lemon Bowl. With an emphasis on healthy eating and living, Liz’s recipes and food photography have been featured in various publications including the cover of Women’s World magazine, Good Housekeeping, Shape, Real Simple, Cosmopolitan, Food Network Blog, Huffington Post, TODAY Food, Foodgawker and The Cooking Channel. Read More…

Welcome To The Lemon Bowl!

Focusing on seasonal ingredients and whole foods, my collection of recipes is inspired by ethnic flavors from around the world.
Click HERE to learn More About Me →