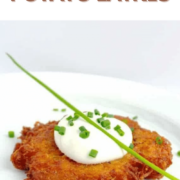 Papa Leo’s traditional potato latkes are the perfect dish to serve for Hanukkah or any day of the year!

When Hanukkah rolls around every year, I have a hard time straying away from the traditional potato latke recipe passed down from my Papa Leo. Crispy, salty, savory potato pancakes in all their glory – it doesn’t get any better than this for a side or main dish! We top them simply with a little sour cream, fresh parsley, and apple sauce. And that’s all you need! If you’ve ever been curious about latkes, here is your sign to give them a try!

How to Make Traditional Potato Latkes

Start your potato latkes by using either a food processor or grater to grate your potatoes and onion.

When you’ve finished grating your potatoes, transfer them to a large bowl and use a paper towel to squeeze as much excess water out as you can. Then add the grated onion.

Into the bowl of the potato and onion, crack in your eggs.

Then stir in your matzo meal.

Finally, sprinkle in some salt for flavor.

Mix well until all ingredients are combined.

Then in a large cast iron skillet or pan, heat a couple inches of oil over medium-high heat. Once the oil is hot, use a large spoon or ice cream scoop to portion your batter into the oil.

Be careful not to overcrowd the pan and use a spatula to flatten your latkes. After a couple minutes, flip your latke so that it can cook on both sides.

Once your latkes are evenly browned, remove from the oil and plan on a pan or plate lined with paper towels to soak up any excess oil.

Continue working in batches until all of your potato mixture is gone, then serve your traditional potato latkes with sour cream and apple sauce and enjoy!

What were original latkes made of?

Before potatoes, they were most likely made with a grain like buckwheat or rye.

What is traditionally served with potato latkes?

Sour cream and apple sauce is the traditional topping! However many also enjoy them with a horseradish sauce.

Are latkes only for Hanukkah?

While latkes are traditionally served on or around Hanukkah, you can enjoy them any time of year!

Did you try this recipe and like it? The next time you make it, snap a picture and share it to your socials! Tag @thelemonbowl and #thelemonbowl so we can admire and share your dish.

Whether you celebrate Hanukkah or not, my family’s Traditional Potato Latkes are a delicious dish worth trying. 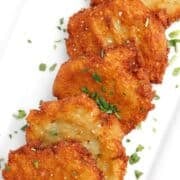 Keep potato latkes in oven heated to warm to keep hot until dinner is served.