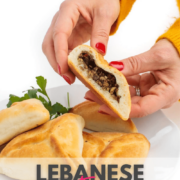 Meat pies are a very popular dish throughout the world. Whether it’s empanadas in Spain, patties in Jamaica or pasties in Eastern Europe, it seems so many different cultures have their own version of a savory pie.

In my family, we grew up eating sfeehas also know as fatayer. Fatayer is a Middle Eastern meat pie that is filled with either meat and pine nuts, spinach or cheese (such as feta.) Part of the Levantine cuisine, fatayer is eaten in Iraq, Syria, Egypt, Lebanon, Jordan, Palestine, and Israel.

What’s in the filling?

The filling is made of ground beef or lamb sauteed in clarified butter and seasoned with cinnamon and allspice. We also love adding toasted pine nuts but that is optional.

Absolutely! In fact, we like to make them in large quantities and store them in the freezer. To reheat, simply bake at 350 until warmed through, about 15-20 minutes. They will keep in the freezer for up to 3 months.

What can you serve with sfeehas?

We love eating them with a big Syrian salad and hummus. They’re also great with stuffed grape leaves.

How do you make the dough for a meat pie?

To serve, we like to dip with plain yogurt but that is optional. While nontraditional, my cousin also likes to dip them in A-1 sauce which now I’m hooked on as well! 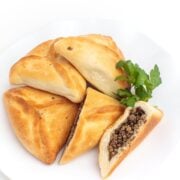 Calories: 166kcalCarbohydrates: 22.2gProtein: 8.3gFat: 7.9gSaturated Fat: 2.4gPolyunsaturated Fat: 5.5gCholesterol: 17.3mgSodium: 343.5mgFiber: 0.3g
SHOW AND TELL ON INSTAGRAM!Show me your creation and rate it below! Mention @thelemonbowl or tag #thelemonbowl! I would LOVE to see!

Check out more of my Lebanese Recipes by viewing my Pinterest board!