Tomato kibbeh is a vegan version of the traditional Lebanese dish, kibbeh nayeh, typically made with raw beef, onions, and bulgur wheat. This vegetarian rendition is made with tomatoes, bulgur wheat, onion, red peppers, and fresh herbs.

If you’re interested in trying new foods from different cultures, then let me introduce you to kibbeh. My Vegan Tomato Kibbeh is a great debut into the world of Lebanese food, and something you could share with anyone.

Originating in Syria, kibbeh is a middle eastern dish including ground lamb, as well as bulgur wheat, and spices and seasonings. It can be eaten either raw or cooked. When cooked, it is usually rolled into balls and fried or baked as croquettes.

Lebanese kibbeh includes the distinct flavor of mint leaves, while usually using ground beef as the protein. Kibbeh nayeh is eaten raw, and my take on the recipe removes the meat so that it can be enjoyed by anyone.

How to Make Vegan Tomato Kibbeh

Begin your tomato kibbeh by cooking your bulgur wheat in your chicken or vegetable stock. It takes about 20 minutes in total; once done, pour in a large bowl and set aside.

While the bulgur wheat is cooking, you can prepare your vegetables. Nothing needs to be cut super small, since we’ll be using a food processor, but you still want to deseed your bell pepper and cut it into chunks.

You’ll also quarter your onion, and cut your tomatoes in half, removing the seeds as well.

Start by putting the onion and fresh parsley in the food processor, with half of the lemon juice. Pulse a couple times until the onion is diced.

Next add the tomatoes and bell pepper, and continue to pulse for a few seconds at a time.

You’ll know it’s finished when you have a salsa-looking paste and there are no large chunks remaining.

Add your vegetable paste to the bulgur wheat in the large bowl you have set aside.

Season with salt and pepper, and add the dried mint leaves. If you want an additional kick of flavor, here is where you’ll also add cayenne.

Give it a good stir until everything is evenly mixed and the seasonings and lemon juice is well incorporated.

Next, spread your tomato kibbeh out on a large plate or serving platter, drizzle with olive oil, and- if you’re feeling fancy- garnish with additional tomato and mint leaves.

Serve with pita bread, pita chips, or nothing at all!

How do I store kibbeh?

Kept in a resealable bag or airtight container, it’ll keep for up to 5 days in the fridge, or 4 months in the freezer.

Can I make this gluten free?

Yes, you can use quinoa instead of bulgur wheat to make this recipe gluten free.

Could I add meat still?

If you want a kibbeh recipe with meat included, I have a baked kibbeh that includes ground lamb and sirloin.

What do I serve kibbeh with?

My favorite thing to serve it with is pita bread or pita chips, you use it to scoop up the kibbeh. Or serve it with a nice salad, like this Syrian Salad.

For those new to Lebanese cuisine, traditional kibbeh nayeh may seem especially intimidating. This Vegan Tomato Kibbeh is not only tasty, but a great way to ease into a new culture and way of cooking and using ingredients. I highly recommend giving it a try. 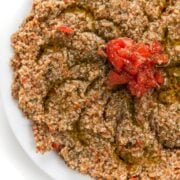